Did you know that Bengali is the 8th most spoken language in the world?

Endonym: Endonym is the internal name for a language or a dialect, popular inside a particular geographical location, ie. what native speakers call the language they speak.

Where is Bengali spoken?

Geographically, most of the Bengali language speakers are concentrated in Bangladesh, India, and Karachi city of Pakistan. There are about 210 million speakers of this language in the world, with about 100 million in Bangladesh and 85 million in India. A considerable number of Bengali speakers reside in the Middle East, United States, and United Kingdom.

Bengali is also an officially recognized language in the Constitution of India.

Before the independence of India from British rule in 1947, Pakistan and Bangladesh constituted the Indian nation. In August 1947, when Pakistan became a separate nation, present-day Bangladesh formed a part of Pakistan known as East Pakistan, which became an independent nation in 1971.

In the East Pakistan region, only 7 percent of the population spoke Urdu, while 53 percent population spoke Bengali as their first language. In order earn recognition for the Bengali language and make it the official language of Pakistan, the period between 1947 and 1952 witnessed huge protests and demonstrations for the support of this language.

In 1952, a student demonstration at the University of Dhaka led to several deaths and hundreds of injuries in the course of police efforts to quell the protests. Nonetheless, the political efforts paid off and in 1954, Bengali became the official language of Pakistan alongside Urdu. Hence, Bengali language emerged as a symbol of national identity as a consequence of the dedicated struggles of people trying to win legitimacy for a widely spoken language. The fight for Bengali also became one of the inspirations for Bangladesh’s independence in 1971. 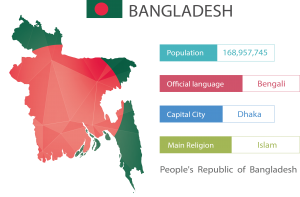 This word is a Bengali synonym for “awesome.”

Fatafati is what you say when you’re happy about something but cannot quite think of the precise word to describe your joy. For instance, a beloved friend from far away is finally coming to visit your hometown: “Fatafati!”

Ghyama is an expressive Bengali phrase used to denote awesomeness. When something is too cool for words, you say, “Ghyama.”

Literally means extensive but now takes on the colloquial meaning of “thoroughly awesome.” This phrase is also commonly used as a synonym to Fatafati.

This is the phrase for all your Bilingua learners out there- simply put, it says “one language is never enough.”

This phrase reveals the Bengali flair for language and literature. Needless to mention, you can find many internationally acclaimed Bengali literary figures. And in general, Bengalis are proficient in at least two major languages.

Feeling corny, turn to your date, look them in the eye and say this, meaning something like, “Please, can we go and sit in the staircase of Rabidrasadan?”. Jokes aside, Bengali is a nimbly poetic language and it is easy to see why one of the greatest poets of the early 20th century, Rabindranath Tagore, wrote in Bengali.

Another sweet Bengali phrase meaning, we will meet one day. This expression is generally used when one builds up a friendship with a stranger at a random place. And people speak it to express the thrill of the rendezvous feeling and the wish to meet in the future.

This phrase literally translates to “the boat of affection can ascend mountains.”

Although Bengalis are open to love marriages (but love marriage is not very common in many parts of India and Bangladesh and many people still go for marriages arranged by their parents), this phrase indicates the faith in a love that can overcome all the obstacles of life.

This phrase simply means “an apple of the eye/favorite person.” Generally grandparents use the phrase for their beloved grandchildren.

This Bengali phrase means no pain, no gain. Bengali people are hardworking and to motivate the youngsters in diligence, people use this phrase.

This is the Bengali version of one of the most universal of sayings: A friend in need is a friend indeed.

If during your travels you saved a cereal box crossword puzzle that for some reason reminds you of a private joke with a friend, and if you cut out the crossword puzzle and send it to said friend in the mail, this could be “a humble gift made by a poor man with a sincere heart.”

This phrase translates to “a thing of beauty is a joy forever.” In the classic Bengali movies, this phrase is used to express adoration for the beauty of the beloved.

This phrase is also frequently used by art-lovers (most of the Bengalis are art lovers) to express appreciation for an artwork.

This Bengali phrase means that a problem is reduced by when we share the burden. Just as we say, the joy multiplies by sharing.

Like this article? Read more about the Indian subcontinent:

How Many Languages Are There in India? (Part 1)

How Many Languages Are There in India? (Part 2)

A Simple Guide to Learning Hindi Through English